Today Chris Amenta and Sarah Smith look at their business’s cash dashboard with new confidence. That’s because the balance is growing. Their business is profitable. They can pay their bills and they can pay themselves every single month. Things are looking up.

One day not long ago, however, things were very different. They opened up their bank’s web page and looked at their bank balance.

Their hearts nearly stopped: $1,000 in the business account. That’s a balance that used to be $100,000—the stake they’d used to open the business. Renovations, purchases, and operating losses had drained that away until there was only $1,000 left.

And it had happened a lot more quickly than they expected.

Here’s how Chris Amenta and Sarah Smith turned their business around–more than doubling monthly revenue ($23k to $49k), bringing home more money than ever for themselves, and having new confidence about the future. 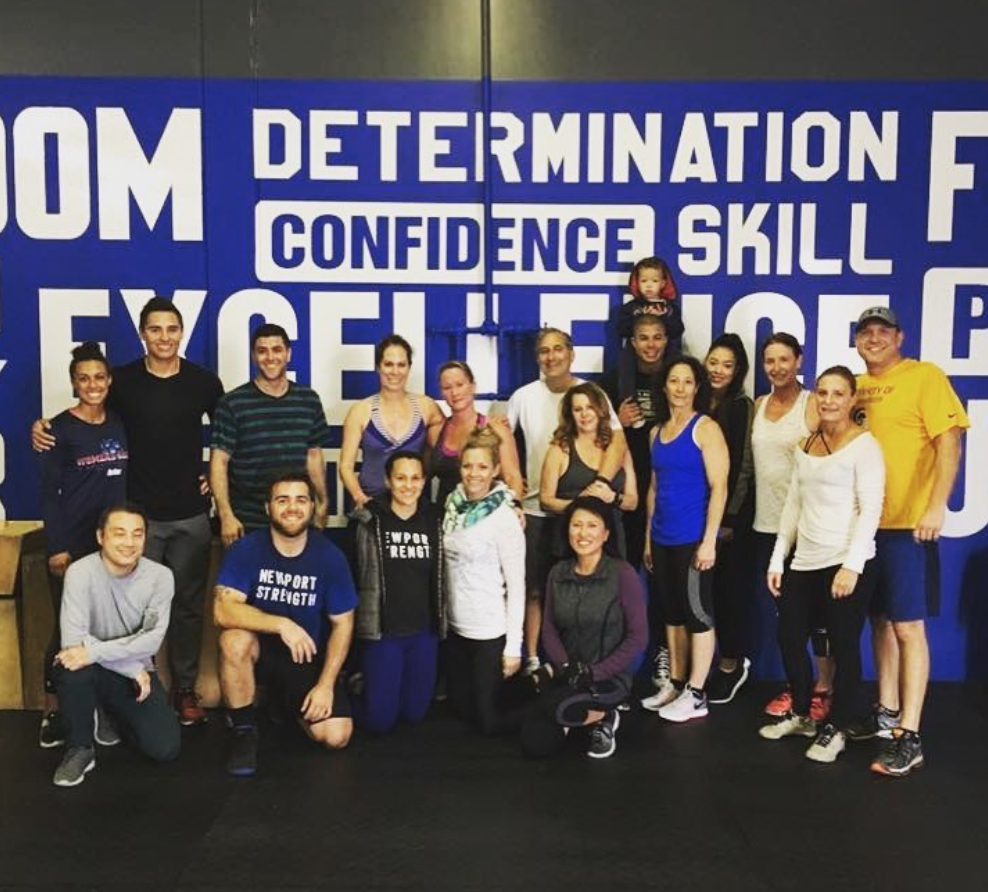 All smiles for Team Newport Strength: Sarah (center, with Newport Strength t-shirt) has a close relationship with the clients in her group training classes, as shown here in a post-workout shot.[/caption]

Chris and Sarah buy a gym

Chris was a paramedic and volunteer firefighter who had learned weightlifting while recovering in his early 20s from rhabdomyolysis, a disease where muscle tissue breaks down. He developed a passion for the fitness industry and when he was 25, founded a weightlifting club for youth and young adults. He was the only coach for a group of five athletes for his income, which wasn’t much.

Meanwhile, Sarah was a competitive hockey player in Canada who got into CrossFit to keep in shape off the ice. She moved to Southern California to complete a graduate degree in sports management, and she interned with the Los Angeles Kings. To earn a few extra bucks, she taught CrossFit part-time.

Chris and Sarah met at a CrossFit gym, and Sarah joined his weightlifting team. Initially, she was just one of the athletes, but then realized her management education could help Chris with the business side of his weightlifting club. They teamed up, and with Sarah’s visa about to expire, they needed to make a decision to allow her to stay in the country. They decided to go into business together.

They approached Newport Strength’s owners about renting space. They were turned down because of the difference in the target market of each business. However, the owners were looking to leave the fitness industry, so they sold the business to Chris and Sarah.

Together, Chris and Sarah had about a $110k stake. They bought the gym for $73k. A $25k renovation followed. Sarah quit her part-time job. Chris left a well-paying career as a paramedic, and took on more of a role at the gym beyond just coaching his weightlifting athletes. They were “all in.”

The problem with having plenty of cash on hand is it’s easy to spend the bankroll down if you’re not careful. They had taken a little bit more from their cash each month … until a few months in, they fired up the computer, checked their bank balance, and saw their balance was $1,000.

“Then it was like ‘Oh, there’s a limit to this,’” said Sarah. “We didn’t really know what to do from there. We were running out of money, but we’ve got SOME money coming in. We were not sure what to do.”

Chris adds, “In the beginning, we both didn’t know what we were doing, we were both just trying to fake it … I was walking in the dark and didn’t understand where we were going.”

That led to second thoughts about the enterprise. He wondered if he’d done the right thing …  not just in buying the business, but giving up his paramedic career.

And both of them had another issue: The types of clients they would serve.

Newport Strength had a clientele of women, 40-60, who usually did morning classes.

Called coach in a panic

Chris and Sarah didn’t have to look far for help. They had assumed the NPE contract as part of the purchase from the previous owners.

In the first few months, Chris and Sarah dutifully did their online education modules. Chris said this work was “compartmentalized,” and not being applied.

Until they nearly ran out of cash.

“The holes were in the boat, and we didn’t know how to plug the holes properly,” said Sarah.

She called her NPE coach in a panic.

“It began to be super-stressful for me, to be figuring out what’s coming in and what’s going out … OMG, I have to sell a package … we have to make money somehow,” said Sarah.

“What we find with NPE is wherever we are, that’s where they can meet us,” said Sarah.

A new plan stabilized the business

The coach introduced her to lessons, tools and resources for cash management.

“Introducing me to Cash Dash changed my life,” said Sarah. “I completely run the business off that now, and I have complete control, understanding, and security in the finances of the business.”

However, that didn’t stop the bleeding. There were some software packages, subscriptions, and other technological expenses that the coach noticed during an expense audit. These expenses could be reduced or eliminated, he found.

Next, Chris and Sarah focused on selling monthly plans to increase recurring revenue.

High levels of recurring revenue means you start the month knowing how much is coming in before you sell more. Using NPE sales systems and tools, they brought in more recurring revenue and stabilized the business. (Reduced stress, too.)

A third big change: Deciding what clients they want to serve. This was a game-changer.

“It has been difficult to target the older demographic. We tried to sell just to that target market. But that’s not what WE were anymore,” said Sarah.

“That demographic was looking for something very quiet and very high end … but our gym is in an industrial park, there are weightlifters, there’s music going all the time, people are running, people are sweating. The women were coming in and saying this is overwhelming, where’s my bosu ball and that’s all I want to do.

“It took us nearly an entire year to realize we are targeting the wrong people. We don’t want people who are here as an excuse. We want people WHO are willing to get dirty, who are not afraid to work hard, who are willing to put forth the effort to make their lives better and to improve their health and wellness.

One 72-year-old client was told she needed knee surgeries, but with weight training, she grew much stronger after three months with Sarah and Chris. She returned to her physician, fitter and much stronger. The doctor told her — saying, according to Chris, “I don’t know what you’ve been doing, but don’t stop. You don’t need the knee surgeries anymore.”

That kind of client success translated into business success. Going after clients they love to work with generated Chris’s and Sarah’s best month effort in December 2017, breaking $30k in month revenues for the first time. (A year-over-year increase of 28%.) Growth continued throughout 2018, and they had their best month ever in July, earning $49k–more than doubling their revenues since they purchased the gym in November 2016.

Sarah and Chris also more than doubled their recurring revenue, from $12k when they started to $27k per month. As a result, they no longer feel pressure to make instant sales to bring in immediate cash but know that they have steady cash flow whether the new client purchases a package and pays upfront, or chooses a monthly payment plan. In fact, they push clients to sign onto monthly packages because their financial goals are focused on recurring revenue.

They’re also correctly forecasting their monthly revenues, so they don’t have to sweat when money is coming in.

“We are paying ourselves more,” says Sarah. “I am paying off my student loans really quickly. Chris is putting payments on his loans as well. We have a lot more financial freedom, can move to a larger apartment, and are getting married next year.”