Arlene Caffrey didn’t start out her career knowing that she wanted to be a fitness business owner.

She studied Graphic Design in college but as the global economy declined, her lecturers told her to start applying for visas to Canada and Australia because there wouldn’t be any local jobs in their industry once they finished the course. Arlene and her classmates thought the lecturers were joking.

But they were right.

As the economic situation in Ireland worsened, almost 1,000 people were emigrating per week. Youth unemployment was at 31% and bailouts were estimated at €67.5 billion.

Arlene couldn’t get a job and lived off of €180 per week from social welfare. She took up pole fitness as a hobby until she could get a job as a graphic designer.

“I never envisioned it being a career. I’m not a sporty person. I thought it would just be for a few years.”

It took Arlene two years to save up enough money to get her qualifications and become a personal trainer. In 2011, she started her own fitness business in Dublin and worked out of rented rooms four times per week. She also drove halfway across the country to Galway at 5am to put on additional sessions in a hotel basement.

“The hotel basement was so tiny and it stunk, but I loved it – it was my business. I was doing something and making stuff happen.”

For the next two years, Arlene continued working hard, driving across the country, and putting up poles in rented rooms.

In 2012, Arlene pushed herself too hard, fell during her own training, and broke her collarbone.

“When that happened, I lost my business overnight. I couldn’t drive. I couldn’t teach classes. I lost everything.”

Arlene couldn’t work for six months and took the time to think about what she was going to do for the rest of her life. She decided to return to her fitness business after her injury healed, but with more focus. 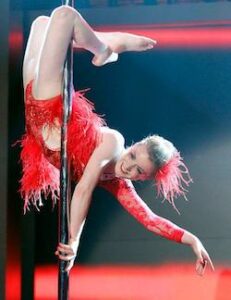 Arlene started receiving emails from NPE through a partner, but was hesitant about the company:

“You’re reading all the client success stories and see how all these awesome clients are in America who have doubled their business and quadrupled their sales and all this amazing stuff and you’re like, ‘This can’t be real.’”

But Arlene wanted to see if NPE was too good to be true, so she attended NPE’s FAST FORWARD™ workshop in December 2013.

“I sat there with my arms folded and skeptical. I saw how awesome their systems are and could understand how that could work for personal trainers, but I thought I was different. I have a pole fitness studio and this wasn’t going to work for me.”

In February 2014, Arlene opened her first studio in Dublin and realized she didn’t have systems in place to run a sustainable business. A month later, Arlene had courage, practiced faith, and joined the NPE ACCELERATOR™ program.

She recruited some of her clients and hired them as her first admin and trainer.

But Arlene was only making about €2k every six weeks because of her packaging. When Arlene replaced her six-week courses with NPE’s recommended 3, 6, and 12-month packaging, she lost half of her 17 clients overnight and her staff had an intervention with her.

“They said, ‘We know you’re trying to make a proper living but let’s go back to the 6-week course. People love that.’ They didn’t get it. But that was my fault because I didn’t tell them what the vision was.”

Arlene was determined to provide jobs and help get the country out of the gutter. It wasn’t a quick fix overnight, but eventually her staff started to come around to her vision.

Once her staff got over the new packages, their close rate increased and the studio quadrupled revenue from €2k to €8k per month. Her accountant informed her that she should be paying the luxury VAT of 23% instead of 13.5% because they didn’t consider her business to be fitness.

Arlene had to run her second Raise the Rates campaign in six months until her accountant sorted out the VAT situation.

“It was awful, but thankfully my clients were cool and said, ‘We love you and are happy to pay more.’”

In December 2014, Arlene decided to #RiseUp and join the NPE Coaching ACADEMY™ Program.

As her business grew, Arlene started facing new obstacles. She realized that she had a retention issue because people considered pole fitness a fad. Although she got a lot of people into the business, they would only stay for a few months.

Arlene was running a 21-day challenge that had about 12 new members every month, but only two would sign up for a membership package.

“I realized it was a sales issues – we didn’t have systems in place. We hadn’t fully sold to them and weren’t over delivering on services. Once we identified where the leaky bucket was, I thought I needed more clients, but what I really needed was to get them in, over deliver, and then nurture them into clients.”

Once Arlene and her team fixed the retention issues, they started closing 8 out of 12 people who joined the challenge.

In August 2015, Arlene opened a second studio in Galway and continues getting qualified leads each month. By February 2016, both studios were profitable and revenue was €12,700 at her Dublin studio and €6,700 at her Galway studio.

Arlene continues to expand her awesome community that helps empower women to overcome their insecurities and get stronger. 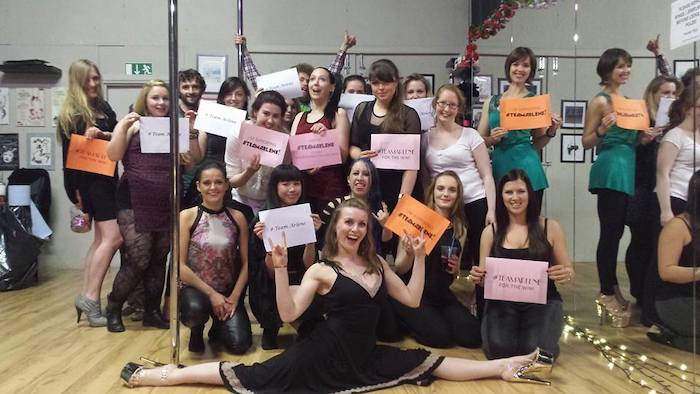 Arlene with some of her clients and biggest supporters.

In 2015, Irish Pole Dance Academy was nominated for the best pole fitness studio in the world, and she’s determined to win it this year no matter what obstacles come her way.

“You’re always going to have challenges put in front of you, but you just have to do something about it. You can’t just sit around and think, ‘Poor me. It’s the economy. It’s someone else’s fault.’ You just have to keep pushing past it.