Brian Nedab has always been determined. He ran track, swam, and played lacrosse in high school. After obtaining his Masters in Education, he went active duty in the U.S. Coast Guard, where he discovered CrossFit.

It wasn’t long before he and his wife and fellow coach, Sabrina, opened a CrossFit gym of their own.

Brian’s experience as an athlete shaped him into becoming a fitness entrepreneur, since that’s where he learned that success doesn’t happen overnight—and that you have to keep at it.

“Just having the mindset that you need to chip away at things day by day to be able to get to that end goal, and knowing that things just don’t happen overnight… but if you put in the effort at the forefront, things will eventually get to the point where you’ll get fruition.” 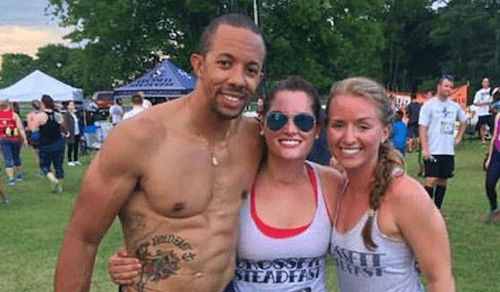 “The CrossFit SteadFast crew participating in the Nine Line Run for the Wounded 5K.”

When he first opened his gym, Brian knew he could fall back on his Masters in Education. He’s also a Coast Guard reservist, so he had the option to go active duty again.

“Knowing I had the Coast Guard and my education degree as backup plans really helped me to venture out a little more so I could say at least I tried if I failed in the end—but things worked out pretty well.”

That said, the transition wasn’t easy. Brian and Sabrina often questioned themselves and their decision. They literally lived in their gym for a year and a half.

“Some days we woke up thinking, ‘Can we eat today? Is it going to be Ramen noodles or not?’ But at the end of the day, when we heard people complaining about their workdays, we just trained members all day. It’s pretty awesome to be able to have that effect on people’s lives.”

Brian was passionate about coaching and had a good rapport with gym members, but he credits NPE with giving him the knowledge and tools he needed to take his business to the next level.

“I was almost at a stagnant point until NPE came around, because even though my net profit was increasing each month, I didn’t know the things I needed to know on the business side of things. NPE helped me get to the next point, and to know that I can continue down this path.”

Brian and Sabrina first discovered NPE through an NPE Success Coach who also ran a kettlebell training studio in town.

“We met her after she’d just moved in town. She asked us a few basic questions like what our net profit was, what are our margins like, and I just looked at her with a dumbfounded face like, ‘I don’t know what you’re talking about.’”

So in June 2014, Brian went to the FAST FORWARD™ workshop in Jacksonville, Florida. He was a bit nervous about signing up for ACCELERATOR™ at the time.

They met an NPE success consultant who told them what NPE was about. “At that moment, it was a hard sell. It was like, ‘Can I afford to give this guy all this money to be able to get to this next point?’ and as he said, have courage in spades. But we went into it, and things have been pretty good afterwards.”

The month before FAST FORWARD™, Brian’s gym was earning about $10,000 a month in gross revenue. That number had already shot up to $15,000 when he started the ACCELERATOR™ program just two months later.

“That was a substantial increase already, and then at that point we had a steady increase each month until January 2015. In July or August, we made $20,000 in gross revenue. After MEGA TRAINING™ of last year, we decided to join the NPE Program with the same mindset—‘Can we afford to do this?’ We pulled the trigger again, and it’s been great for us putting these systems in place and starting to step up our game and step into owner-type roles, and being able to see the big picture of where we are thinking of going.” 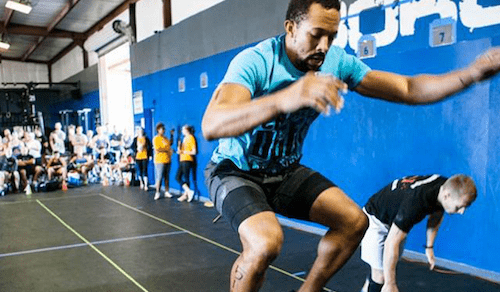 “Brian completing his box jumps at the RISE of the SOUTH Competition in Statesboro, Georgia.”

One key takeaway Brian took from NPE was that in order to boost revenue, he had to start capturing more leads.

Before NPE, he didn’t actually know how many people were visiting CrossFit SteadFast’s website. Now he has a system in place where it’s easy to not only know how many visitors the site has, but to capture leads, sign people who’ve expressed interest up for consults and then get them into the OnRamp training program.

“Knowing those numbers helped us know where we were and where we’re going, so that was really empowering.”

Beyond that, NPE helped Brian get things in order internally. He set up standard operating procedures and created a staff handbook to build consistency in the business.

He’s also learned to increase his efficiency by delegating tasks when necessary, so he has the time to speak publicly, grow his brand, and get more members in the door.

“At the end of the day, I have to ask myself, what is my time worth? Where can I put myself at most value? Knowing that I can play to my strengths and delegate to my weaknesses, but still be able to have the knowledge to have oversight over everything—that was really helpful.”

Brian also appreciates the insight he gets from the NPE community. Being able to post in the open question forum and get ideas and feedback from other coaches who have experienced the same things he is going through is invaluable.

Brian plans to continue growing his business, and eventually own the building his gym’s housed in rather than renting. Meanwhile, he’s enjoying the time he’s freed up for himself by spending as much time with his kids as possible. 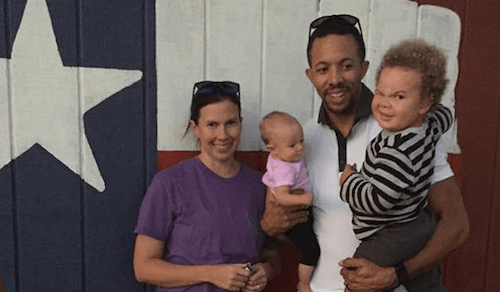 “Brian and Sabrina spending time with their two beautiful children.”

“We just had our second child on May 29th, and at that point we’d hired a lead trainer and an admin that was taking care of scheduling all of our consultations, so all I had to do was just show up and do the consultation. Then I’d get them into the OnRamp program. It was so much easier because we had systems in place.”

Brian and Sabrina make sure to take their toddler to gymnastics once a week, and they’re doing some swim lessons as well.

“I was a former swimmer, so we wanted to get him in the water and get him proficient in swimming as soon as possible.”

He also spends his spare time hanging out with some of the staff, including his new lead trainer, Nader, who also has two kids. “We can just go to the house and hang out and train and try to invest in ourselves a little more, which didn’t happen when we were so invested in the business.”