Desiree Challice – “Getting Clarity, Tools And Systems In Place”

Dave and Desiree Challice know that sometimes things are worth a second chance.

In 2006, they opened up Functional Integrative Training but shut it down four years later after the economy tanked.

Dave was active growing up, went to PT school down in south Florida, and then got certified as a PT and strength and conditioning specialist.

When he became a golf pro, he realized that the more fit he was, the longer he could last on the course during tournaments. Titleist came out with certification for golf fitness instructors, and Dave quickly jumped on the opportunity to become a Titleist fitness instructor and junior coach.

Desiree was also active from an early age – she grew up figure skating, was on the ice at just three-years-old, and became a gym rat by 14. She went to physical therapy school and took the CSCS exam through NSCA after graduating.

Within a few years after getting out of PT school, she began working in acute care at a hospital. Although she loved it, she wasn’t a fan of the bureaucracy. When she saw what PTs were earning, she knew she needed a change.

In 2001, Pilates started becoming more mainstream, and Desiree was competing in figure skating again. She was surrounded by kids and other skaters who were experiencing injury and needed rehab. Desiree became certified in Pilates and started working as an independent contractor at a nearby studio, where she grew her client base.

When Desiree and Dave met in Boynton Beach, FL, they were both in the fitness industry and “love happened” – along with their decision to start a business together. They moved four hours north to Palm Coast, bought a house, and started a business from scratch without knowing anyone in the area.

Dave started going to school to become a Physical Therapist Assistant while they ran the business. They put a logo on the door of their studio, printed out ads, and thought people would just start walking through the door.

A few clients signed up but they didn’t stay for long. Dave and Desiree didn’t take credit cards, track their numbers or have any sales or marketing systems in place. In 2008, the economy crashed, and they survived for two more years before closing down their business.

“We were both heart broken, our pride was hurt, and we felt like failures.”

Both Dave and Desiree started working for separate therapy companies, took care of their son, and year after year, started talking about reopening their business. Although they hadn’t focused as much on their own health since their son was born, they decided to jump back into it in January 2014.

They joined Dr. John Berardi’s Precision Nutrition as clients to learn the program hands-on. One of John Berardi’s articles had a link to NPE in their article on “Why Fitness Businesses Fail.” They quickly recognized what had been missing from their business: sales and marketing systems and tools.

“We looked back and said, ‘Where did we go wrong?’ If you just sit and wait for people to walk through the door, it doesn’t happen.”

In September 2014, Desiree went to NPE’s MEGA TRAINING® conference to learn how to grow their fitness business to the next level.

“I had no idea what we were getting into. I looked at the numbers people were making and looked at the systems and thought, ‘Wow, can we do this?’”

They joined NPE’s ACCELERATOR™ program to learn the tools and systems that they would need to open a fitness business again – and be successful.

In November 2014, they opened their business at the same location with a new name: Peak Fitness & Rehab. But that decision wasn’t easy.

“We were scared this time. In the beginning, we had no fears, no cares, and no worries. We didn’t have a child then, and we weren’t scared at all. This time we were scared. We’re older now and we thought, ‘Do we really want to take on this venture?’ We had a house and a child now. We could lose it all, but in the next breath, our jobs sucked. We said, ‘You know what? We know how to treat people and we know how to get great results.’”

With the help of NPE’s sales and marketing systems and tools, they were able to grow quickly.

They started with just two clients and then ran NPE’s 21-day challenge marketing campaign in December. In January 2015, they ran a press release, held a second 21-day challenge, and started getting new private clients. Their January revenue increased 4x from December.

Although they didn’t feel ready financially, Dave and Desiree decided to join the NPE Coaching ACADEMY™ Program in February to take their business to the next level.

“We were very nervous. We didn’t feel ready but our coaches motivated us and they said, ‘Do it, you won’t regret it.’”

Dave and Desiree had courage, practiced faith, and by April 2015, they DOUBLED January’s revenue. They continued to have a steady increase of clients, hit $11k in monthly revenue in June, and had a best month ever at $14k of revenue in October.

Through working with the NPE coaches and community, Dave and Desiree have consistently increased their clients and sales over the past year. They’ve started going to networking events, hired their first admin, and are adding a nutrition revenue source to help them grow their business more than they ever thought possible.

“NPE gave us the tools, systems and the massive support that we didn’t have. They have the best coaches ever – they’re unbeatable. If you have a question, you can go to the support groups and get an answer. There’s nowhere else you can do that. In the therapy world, there’s not a place like this. In the fitness world, nobody wants to talk to the gym next door. They’re not going to help you get more clients. NPE’s support is unlike anything we’ve ever seen.” 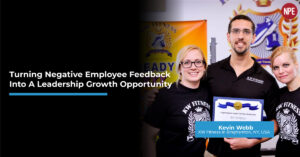 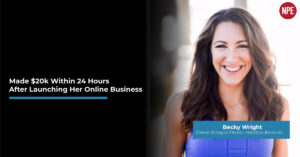 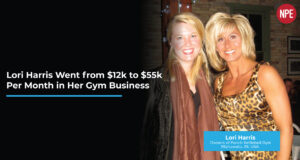 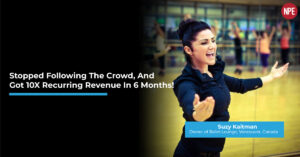